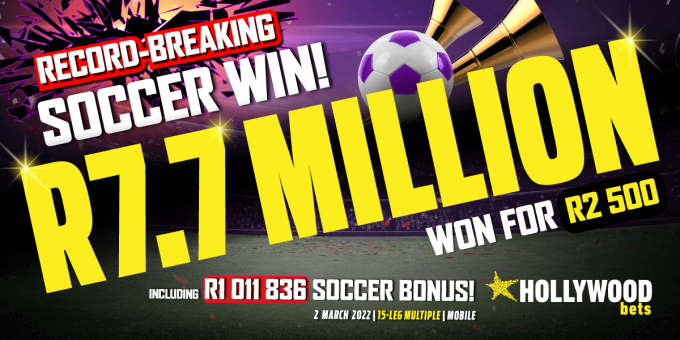 For R2500 a lucky soccer punter meandered his way through Hollywoodbets’ greatest ever soccer journey.

His 15-leg multiple consisted of teams from all over the world and consisted of some favorites and one or two outsiders.

His journey started off in Estonia before navigating through to Hungary, the Netherlands and a host of cup matches and league matches, before ending in the early hours of this morning in Portugal as FC Porto defeated Sporting Lisbon 2-1 in the Taca De Portugal to give the punter in question a massive R7.7 million.

Over R1 million of his winnings were contributed by Hollywoodbets’ incredible soccer bonus which you get every time you take a soccer multiple with Hollywoodbets.

Congratulations to the punter who picked up a life changing sum of money, as much as you’d win from the playing the Lotto! We’re also confident that this is the biggest sports betting win ever in South Africa. The benefits of the Soccer Bonanza boost are also clear for all to see, as the 15% boost translated in to an extra R1 Million. Hopefully we’ll see some more big wins like this soon, as the maximum soccer win at Hollywoodbets is R20 million.